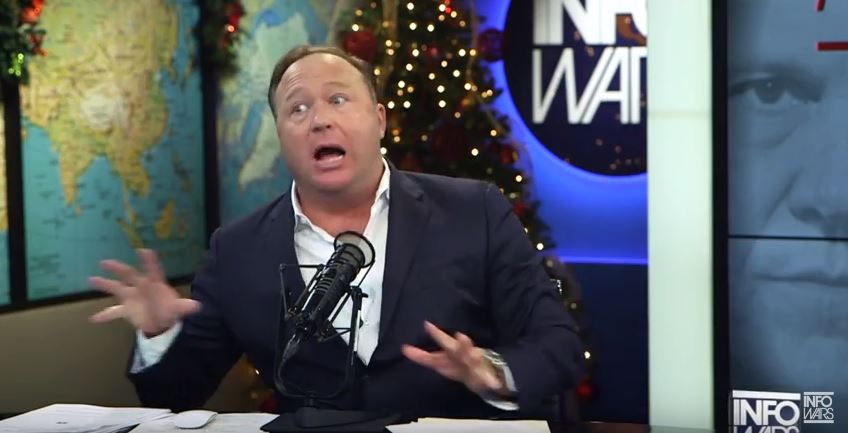 ***Watch the clip below before Infowars take it down.  Exchange starts at 48 minutes and 43 seconds***

Even before Roy Moore lost his Alabama Senate race to a Democrat last night – and well before Alex Jones hot-footed it out of his Central Texas Infowars Command Center and left Owen Shroyer to wet his own bed when he realised how hated himself, Infowars, Donald Trump, Steve Bannon, and of course, Roy Moore are, even in Alabama, whilst Jones hid behind his sofa – Jones and Shroyer were in the midst of an epic meltdown which amongst other things included the craziest and probably sickest defense of Roy Moore’s alleged molesting of young girls you’ve heard.

But before we got there, there were inklings that Jones was turning the crazy dial up to eleven and was about to say something beyond the pale.  Jones warmed up for his meltdown by telling his audience:

“I’m psychically connected to god.  I’m like an ugly centipede just crawling towards god.  If we don’t take control of the country and the world Owen, evil will.”

The ugly centipede, shortly afterward, launched into a defense of Moore’s alleged molestation of fourteen-year-olds by asserting:

“I’ll be honest, I know about super deep Southern culture, it’s almost like the Muslims with arranged marriage, they do nine-year-olds, they do 16 (year olds)  in Alabama, it’s just an anthropological psychological view, you don’t want your 17yr old daughter to marry some drug addict guy, you want to shop ‘em around.

And in the old days all the rich thirty-year-olds, they were so honorable, your daughter could go out with them, go out to eat, meet ‘em, see who your daughter liked, these are the rich guys in the town, you’re hoping your daughter gets with them.  And so Roy Moore did all that, then they took a bunch of women lied about it, fake, fake signature things, things that didn’t happen, they used the fact that this is so old-fashioned to spin this whole deal.”

Bootlicker Shroyer wonders where else his tongue could go

“I mean it’s not just old-fashioned it’s also basic psychology.  Most women are ready to have children a lot earlier than men.  Most men are usually more interested when they are older. (Older) men are attracted to younger women.”

To which Jones replied:

“Your nursing home plan is your wife you get in the south.”

So let’s break that down.

Jones appears to be saying that hanging around shopping malls and molesting underage girls is part of a rich Southern tradition, kind of like what some Muslims do (citation required).

And Shroyer is appearing to say that is ok to hang around shopping malls and indulge in pedophile behavior because, according to him, “women” are ready to have children younger than most men and older men are attracted to underage women (to clarify, this seems to be the inference).

And Jones concurs by appearing to suggest being a pedophile is a nursing home plan for Men in Alabama and the Deep South.

And Shroyer and Jones wonder where all the Moore supporters went?

Jeez!  If I was Jones and Shroyer tonight, I wouldn’t be heading to Alabama.

The pitchforks are gonna be out for them real tasty.